DAWN DIEZ WILLIS
Still Life with Judas & Lightning was a finalist for the 2015 Oregon Book Award in Poetry.

Following a "caravan of mystery,” Dawn Diez Willis’s first collection enacts a multifaceted pilgrimage into the nature of the sacred. Ruminating on an everyday darkness, these poems lean toward the light within the fierce vitality of existence.  With musical lusciousness and deeply felt images, Still Life with Judas & Lightning unfolds like a peony, the lives like petals forming a single experience of complex beauty.

Brenda Shaughnessy’s comments on Still Life with Judas & Lightning as part of the Oregon Book Award judging:
“Many of the poems in Still Life with Judas & Lightning takes place in the same intersection as that title: where betrayal and ordinary miracle meet. Where the high-flying belief of childhood (a boy’s rapture on a trapeze just before he knocks out a “big kid” tooth) meets that sordid, sullen moment of disillusionment (in “After the Strip Club” a man falls to his knees.) Diez Willis deeply understands the way the sacred and profane not only define but help constitute each other. The child—sometimes obedient, sometimes lost, full of longing, or hurt—may become the homeless teenager or the prayerful one; the same human may later morph into the widow, the inmate, Mom, Billy, Martha, Fidela, the one who chooses to live. The characters are unforgettable. This book is a marvel and Diez Willis is a truth-teller with a major talent for breathtaking last lines.” 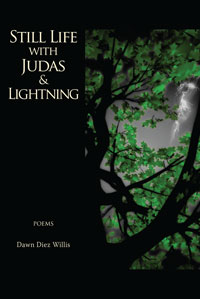 "Dawn Diez Willis’s Still Life with Judas & Lightning is a quietly startling book and a strong debut.  [...] In their vividness of scene, their stark presentations of characters stripped down to their souls, these poems put me in mind of Ai’s Cruelty, yet Willis’s book might better be called Mercy for the counterpoint of compassion that radiates in every line she writes."
-- Garrett Hongo, author of Coral Road

“It is a remarkable, magnificent collection that calls for a certain tough tenderness in the reader, for a love of the beautiful and glorious to be found in all broken and wounded things.”
--Gina Rae Foster, author of Beautiful Laceration

"You’ll find here the seething distance of an observer give way to cherished truths, more revealing than any confession. Here are the utterances that make the knowable an intimate encounter with the unknowable."
--Major Jackson, author of Holding Company

“The intensity of Diez Willis's gaze gives Still Life with Judas & Lightning a disarming immediacy.  [...] critical enough to see beyond the exhibit-glass to the truest, most memorable aspects of human experience.”
--Dorianne Laux, author of The Book of Men
Powered by